The wise men came to see the baby Jesus shortly after he was born. Travel wasn’t easy in those days, and the rich and powerful preferred to send representatives rather than go on the road themselves. The rich and famous often gave presents to their equals, but homage was something reserved for their superiors. You wouldn’t expect rich folks like these guys to bow before someone who was born in a stable rather than a palace.

Where would they look for a king?

These visitors were looking for the king of the Jews, and they weren’t even Jewish. They used King Herod, who thought he was king, to ask directions, the same way we might stop at a gas station to ask for advice. When they finally found the baby, they greeted him with both joy and reverence.

And so the wise men, the Magi, come to worship the infant Jesus.

After Jesus was born in Bethlehem in Judea, during the time of King Herod, Magi from the east came to Jerusalem and asked, “Where is the one who has been born king of the Jews? We saw his star in the east and have come to worship him. When King Herod heard this he was disturbed, and all Jerusalem with him.”

Herod was disturbed, of course, because any new king of the Jews would be a challenge to his own kingship. The rest of Jerusalem could easily have been afraid of a coup or revolution.

When he had called together all the people’s chief priests and teachers of the law, he asked them where the Christ was to be born. “In Bethlehem in Judea,” they replied, “for this is what the prophet has written: “ ‘But you, Bethlehem, in the land of Judah, are by no means least among the rulers of Judah; for out of you will come a ruler who will be the shepherd of my people Israel.’” (Matthew 2:1-6)

Why did they bring those gifts into a stable? 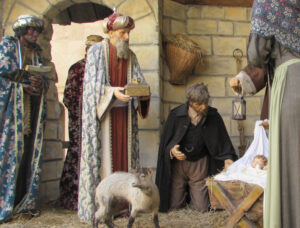 The Magi went to Bethlehem and found the baby in the place pointed to by the star they were following.

After they had heard the king, they went on their way, and the star they had seen when it rose went ahead of them until it stopped over the place where the child was. When they saw the star, they were overjoyed.

On coming to the house, they saw the child with his mother Mary, and they bowed down and worshiped him. Then they opened their treasures and presented him with gifts of gold and of incense and of myrrh. (Matthew 2:9-11)

Just to see how well you pay attention to the scripture story, how many kings were there? Do you think there were three kings? … Do you have no clue at all how many kings there actually were? …

If not, you are correct. The scriptures tell us how many gifts were brought, but not how many people brought them. The tradition of three kings, each with their own names and stories, didn’t appear until hundreds of years after the birth itself.

The gifts themselves, of course, are highly symbolic.

In the time of Jesus, myrrh was a fragrance used to anoint bodies for burial as well, so it also connects the baby at the beginning of his life with his coming sacrificial death. With these gifts, the Magi covered all the bases—royalty, divinity, holiness, and sacred sacrifice.

Who were the Magi?

But who were these Magi anyway? As best we know, they were members of a group that most likely started among the Chaldeans or the Assyrians. They spread from Chaldea to Assyria and then to the area around Media, finally coming into Persia, where they became quite prominent.

The Magi were mostly priests. Sometime after 1000 BC, Zoroaster proclaimed a religion of lofty moral ideals based on the principle ‘Do good, hate evil’. For him there was one god, Ahura-mazda, the Good, who was represented by purifying fire and water. Opposed to the good was a dark evil power.

The Magi came to Persia after the time of Daniel, and they were recognized as experts in astronomy, astrology, and natural sciences. They were highly respected for their learning. The Greek word used for “magi” can refer to one who has and uses supernatural knowledge and ability or simply is a magician.

The Magi are mentioned several times in the Old Testament, and not favorably. Jeremiah mentions the name of one of the men sitting with Nebuchadnezzar when Jerusalem fell to Babylon. That man was later identified in ancient inscriptions as Rab-mag, head of the Magi.

Yes, the Romans were in charge when Jesus was born, but these men’s order were counselors for the ancient enemies of Israel’s history. They were rich and educated, from the group that guided the conquerors of Israel’s past. When they came, they came on behalf of the nations, on behalf of the powerful foreigners who had caused Israel so much grief.

When they come into the story of the birth of Jesus, the Magi represent the best that the outside world has to offer in education, wealth, and power. They followed a light in the night sky to find the light that was coming into the world, a light that they had no reason to expect or understand.

Why was Herod jealous?

King Herod was the local king appointed by the Romans. He was widely known as Herod the Great. His building projects were extensive, including completely rebuilding the Temple itself, the Antonia fortress, the city of Caesarea and many other projects.

However, Herod did have some issues with his qualifications. He was not even a descendant of Jacob, but was descended from Esau and thus was an Edomite. He was born in Idumea, south of Judah, so technically he was not even one of the people of Israel.

Herod reigned from 37 BC to 4 BC Since Herod was not the rightful king from the line of David, most of the Jews at that time hated him and never truly accepted him as king. If someone had been rightfully born king, then Herod’s job was in jeopardy. Because he was paranoid about threats to his power, he eliminated anyone he felt threatened him. This included members of his own family.

Herod’s crimes were many. He had put to death several of his own children and some of his wives when he thought they were plotting against him. Emperor Augustus reportedly said it was better to be Herod’s sow than his son, because a pig had a better chance of surviving in a Jewish community. This was a pun, since in Greek there is only one letter difference between the words “sow” (huos) and “son” (huios).

Herod tried to use the Magi to get information to lead him to the child they were looking for. Fortunately for the baby, they avoided sharing information with him.

Then Herod called the Magi secretly and found out from them the exact time the star had appeared. He sent them to Bethlehem and said, “Go and make a careful search for the child. As soon as you find him, report to me, so that I too may go and worship him.” (Matthew 2:7-8)

What could Herod do about the baby born to take over his kingship? His reaction, as always, was brutal and over the top. He didn’t know which child it was, so he took out his anger on all the children born around the same time. The same way the Pharaoh in the time of Moses killed all the children who even might be a threat, Herod did the same.

When Herod realized that he had been outwitted by the Magi, he was furious, and he gave orders to kill all the boys in Bethlehem and its vicinity who were two years old and under, in accordance with the time he had learned from the Magi. (Matthew 2:16)

Because Joseph had been warned in a dream, he took the baby safely out of danger to Egypt in time.

And having been warned in a dream not to go back to Herod, they returned to their country by another route. (Matthew 2:12)

Who did the Magi represent?

Nations will come to your light, and kings to the brightness of your dawn. (Isaiah 60:3)

The wise men are the representatives of the nations at the birth of the child, and they’re also the first non-Jews to know that the Messiah arrived. They bow before him. They offer their tribute.

With their gifts, they acknowledge that he’s their king as well. They’re overjoyed to learn that the real king of all kings is born, and they’re the very first to demonstrate that they’re his loyal subjects. These wise men are the first foreigners to recognize Jesus, and thankfully they’re only the first of many.