Jesus is my role model. I found that to be like him, I needed to know him better. The material on this site grew out of that exploration. I hope that these thoughts will help and encourage each of you in your own journey.

The purpose of this site is to help others get to know Jesus better through personal and informal engagement with biblical stories and people. It is also intended to help his followers live together and encourage them in their individual lives and missions.

When I first became a Christian in mid-life, I wanted to know Jesus as the person he was during his lifetime on earth. I was fascinated by the way language and cultural conventions affect thinking, so I studied the gospels with a focus on how Jesus and his followers thought, felt, and interacted with others. My understanding of Jesus developed through a series of formative experiences:

When I first came back to a church, I kept asking the pastor for more about Jesus. He finally sent me off to the Jesuits at a local retreat center, who introduced me to the Spiritual Exercises of Ignatius of Loyola. Normally the Exercises are studied in a 30-day retreat, but I took two months leave from work to do them in 6o days, working on them during the day and caring for my home and family in the evenings.

The Exercises required four periods of prayer for each “day,” each at least an hour, as well as an hour meeting with the director. The prayer was based on a specific series of gospel readings, and the only question the director asked was “How was your prayer?”

Ignatian prayer is sometimes called the “prayer of the imagination” because one prays over the scripture several times, each with a different focus and using all the senses. In the prayer, you put yourself as completely as possible into the situation in the story, intellectually, sensually, and personally, taking the roles of the various participants. Finally, you put yourself into the situation directly and speak to, and sometimes with, Jesus. These experiences provided a direct and intimate engagement with the person of Jesus.

My most vivid interaction came in the account of the rich young rules. At the end, when as directed I went up to Jesus to ask, “What should I do?” I heard very clearly that I had to give up my attachment to happy endings. I concluded that the person on the other end of that conversation knew me very, very well.

I began seminary on the path to an M.Div. degree and ordination in the Presbyterian Church. I found that our denomination was very heavy on the interpretation of scripture. We were required to study and pass courses in biblical Greek and Hebrew, and even write a weeklong take-home exam interpreting an Old or New Testament passage in the original language. We had to do everything from translating out of the original language explaining why we chose specific words, to providing an outline of a sermon about the passage.

While I never became fluent in either language, I did learn to use the various lexicons that explained how a word was used in different regions and cultures around the first century.

I learned that reading the scripture in the original languages, as required in the ordination process, was necessary for research from the sources. I learned that Koine Greek, as spoken around the Roman Empire at the time, is sort of like English as spoken in Spanish Harlem or Chinatown—just enough formality to get the basic ideas across.

Jesus and his early followers were multilingual, with only Paul having an education from his qualifications as a Pharisee. Even Paul used the rougher and informal language of the streets in order to communicate with those around him. The refined language we got used to in the King James Bible was not the way these guys talked with those around them. Jesus and his companions emerged as strong, passionate, and still intensely faithful folks. I came to like them a lot.

Thanks to a gift from the congregation of my church in New York, I was able to travel on a pilgrimage “In the Footsteps of Saint Paul.” We traveled through Greece, over to Ephesus and Patmos, and on to Rome. Fortunately, with the lowering of the water level in the Mediterranean, many of the formerly waterfront cities remains are far inland and have been available to archeologists. 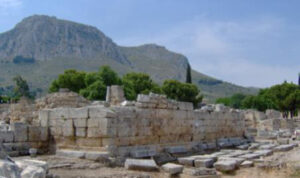 It was standing on the stones of the agora in Corinth I finally had to come to terms with the reality of the person of Paul. In chapter 19 of Acts, Paul is brought before the Proconsul Gallio, a cousin of Seneca. The platform that the proconsul used to consider disputes was called a bema, and, as I stood on the stones in front of it, I realized that the real Paul had stood on those very stones. He became a person I could not ignore.

I had a similar experience coming to face the reality of John in his exile on Patmos. The cave in which he lived was halfway up one side of the v-shaped rock cliffs that define the island. As I stood on the hillside looking down at the harbor and the opening to the sea, I had a sudden sense of the intense loneliness he must have suffered, watching the open ocean in the distance, and separated from all that was happening in the world. It made the writer of Revelation a real person for me.

In Israel my experience was very different, since people have been living on the same sites for so many centuries. Since many of the important sites have been covered with commemorations or churches, only a few remaining places made possible the sense of experiencing the original settings.

Just outside Jerusalem near the border with Bethlehem there is an area called the Shepherds’ Fields, with an underground grotto that is used as a primitive chapel. It feels very much like the undercroft of a home or an inn, a stable-like area where the animals were sheltered. It felt to me much more like the place Jesus was born than the elaborate cathedral where thousands file by the spot marked on the floor to mark the actual location of the birth.

As we rode the massive tour bus up the narrow hillside street into Nazareth, we passed stalls where vendors displayed their fruits and vegetables. There I could picture Jesus as a young man stopping to buy some lunch in the middle of a hot day’s work.

The river Jordan appears not to have changed much in the centuries since Jesus was baptized there. It is a small but very beautiful and peaceful river, and a wonderful place to remember the anointing of the Holy Spirit. It is also a place to touch the water and reaffirm our own baptism, or even to experience a formal baptism for the first time.

The Sea of Galilee, with its surrounding mountains and quirky winds, is every bit the background for so many of the scripture stories. The remains of an ancient fishing boat, preserved and dug out of the mud, let visitors see and picture themselves in the kind of boat that Jesus and his companions used on the waters.

On the Mount of Olives, one ancient olive tree in the garden of Gethsemane remains among the trees to testify to the prayer of Jesus there. Looking back across the valley from the Jerusalem side, one can still see an old stone road where Jesus was brought into custody on the night of his arrest.

The experience of visiting these places, where the figures I had read about and studied for so long actually lived, brought them a more intense reality. The accounts moved from “hearing about” to being able to picture them in the backgrounds for the action in their lives.

When I came back to seminary, I was excited to participate in classes that combined Christian and Jewish perspectives. Andover Newton and Hebrew College combined to offer classes that consisted of half students from each tradition and were taught by a pair of professors, one from each side. The courses included sacred texts, the nature of the messianic age, and even the Song of Songs.

For example, in one conversation with my study partner, a rabbi from a neighboring town, we talked about the conflict between Jesus and the Pharisees over healing on the Sabbath. He pointed out to me that in the Mekilta of Rabbi Ishmael, the Pharisees had in the end agreed that healing on the Sabbath was appropriate. He showed me a Jesus who was part of the active disputation at the time, not a categorical enemy, but one who was accepted as a colleague participating in the search for truth. These interactions led to study of Jewish scholars of the New Testament to try to see the Christian movement from the perspective of faithful brothers and sisters in Judaism.

I was always puzzled that Paul could say “there is no law” and yet tell the people of Corinth that they needed to behave themselves. On what basis, if there was no standard? This led to many questions, and especially to wondering what behavior Jesus and the early church expected of his new, non-Jewish followers.

I was challenged by the question, “How do we know which of the Old Testament commandments Christians need to obey?” When I asked one of my Jewish classmates how many laws there were, expecting to hear ten, he said, “We Jews have 613, but you only have seven.” Where did that come from, and why didn’t they explain it to us?

Since many new Christians in the early church were not Jews, I needed to discover how “righteous Gentiles” were expected to behave in the first century. Doctoral research with Christian and Jewish scholars and engaging Jewish sacred texts led to my thesis and the ideas in Recovering the Lost Legacy.

These experiences provide the foundation for the insights in my work. I hope that you will find different parts of the material helpful as you develop your own personal understanding of Jesus.

The image of Jesus in the headings of these articles comes from a photograph I took of the cross in the chapel of Glastonbury Abbey, a Benedictine monastery in Hingham, Massachusetts. The Abbey welcomes all to their worship, retreat, and educational programs at www.glastonburyabbey.org.

The bible translation used on this site, except where specifically noted, is the New International Version from Zondervan Publishing House, Grand Rapids, Michigan. Scripture is taken from the Holy Bible, New International Version®, Copyright © 1973, 1978, 1984 by International Bible Society, used by permission of Zondervan Publishing House. I have chosen to use this version, sometimes known as NIV84, for it’s smooth text style. I chose not to use the more recent versions of NIV, since their gender inclusive language can obscure some of the original meanings in the text.

If you have any comments, corrections, or suggestions for improvement for this site, please Click Here to let me know by email.